NORWEGIAN cops said the suspect in the Norway bow and arrow atrocity that last night left four women and one man dead had been flagged for signs of radicalisation.

The 37-year-old suspect went on a half hour killing spree in the town of Kongsberg as cops desperately hunted him down.

Several people have been killed and others injured by a man armed with a bow and arrow in a town west of the Norwegian capital, Oslo[/caption] 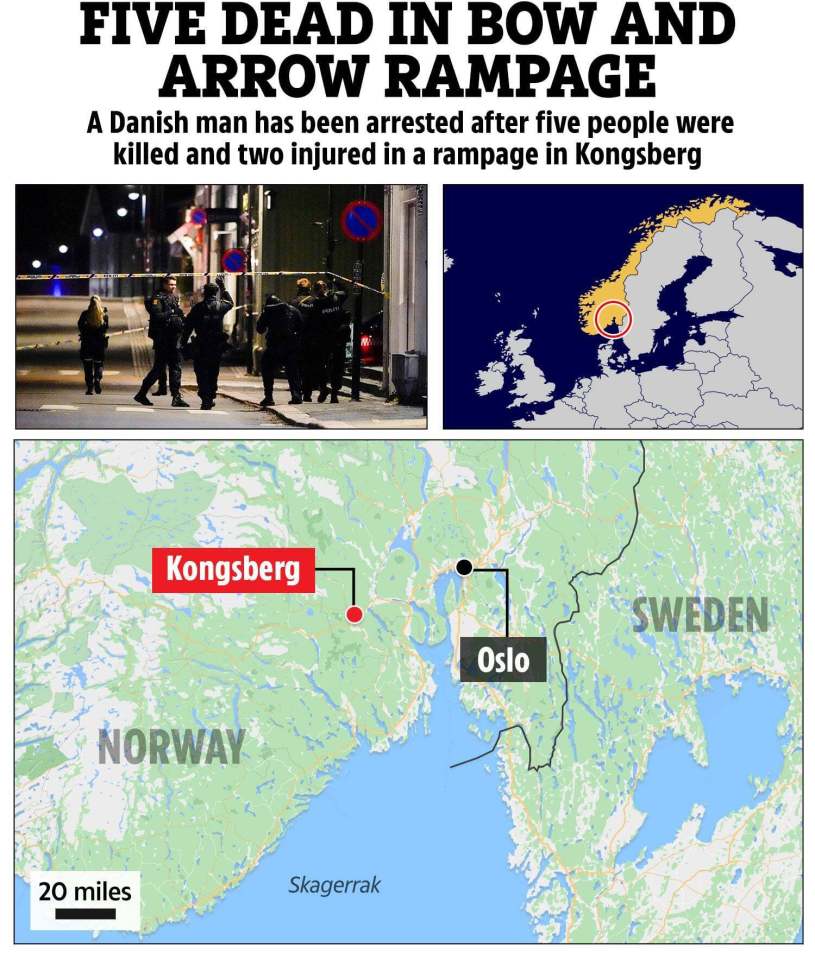 The horrific attack unfolded in the small town of Kongsberg, home to about 25,000 people 50 miles west of Oslo after about 6.30pm local time.

As well as the five killed, two were wounded.

The suspect, who lives in the Kongsberg area, has been held in custody, had has admitted he carried out the attacks. He was believed to have been acting alone.

I saw people flee for their lives. One was a woman holding a child in her hand

Police were alerted at 6.12 pm to a man shooting with a bow and arrows in Kongsberg, some 41 miles southwest of Oslo.

Officers made contact with the suspect but he escaped and was not caught until 6.47 pm, 35 minutes after the attack began, Chief of Police Ole Bredrup Sæverud said at a press conference.

He believed the maniac did not start killing people until police arrived on the scene.

Most read in The Sun

After giving cops the slip, he randomly targeted people in what is being investigated as a terror attack.

The chief inspector said: “There has previously been worrying information about this man linked to his radicalisation which the police have followed up. But in 2021, we have not received any warnings about him.”

Read our Norway attacks live blog for the latest updates

A large area of the small town, some 50 miles from Oslo, was evacuated and cordoned off after the suspect opened fire.

One witness told TV 2: “I saw people flee for their lives. One was a woman holding a child in her hand.”

Among those injured in the horror attack was an off-duty police officer, who was inside a Coop Extra supermarket during the rampage.

He is one of two people understood to be in intensive care.

“We’re horrified by the tragic events at Kongsberg,” King Harald said in a letter addressed to the town’s mayor.

“The rest of the nation stands with you,” the 84-year-old monarch wrote.

Forensic police officers at the scene this morning[/caption]

“We’re horrified by the tragic events at Kongsberg,” King Harald said in a letter addressed to the town’s mayor.

“The rest of the nation stands with you,” the 84-year-old monarch wrote.

Witnesses spoke of finding a seriously injured woman with an arrow in her body calling out for help in a pool of blood near a traffic junction.

One told TV 2: “There were crazy screams of women. I’ve never heard anything like it. It was a death cry.”

There has previously been worrying information about this man linked to his radicalisation which the police have followed up… but in 2021, we have not received any warnings about him

Another witness said: “There is a guy with bow and arrow shooting at people just outside my apartment.”.”

Harrowing images taken in the street show arrows stuck inside a wall after the suspect allegedly missed his target.

Acting Prime Minister Erna Solberg reassured the nation “the police are now in control” in a press conference on the “gruesome” attack.

Mayor Kari Anne Sand said a crisis centre had been established in the town adding: “It is a tragedy for all those affected. I am speechless.”

An investigation is underway into the suspected terror attack[/caption]

The attack happened on the eve of a new government taking power.

Ms Solberg said the mass murder would not affect the handover and the new prime minister would be sworn in as planned.

Discarded arrows were spotted in the town last night as bomb squads, police dogs and soldiers remained on site.

Last night’s shooting was the deadliest attack in Norway in a decade after far-right extremist Anders Behring Breivik killed 77 people in 2011.

We pay for your stories!

Do you have a story for The Sun news desk?

Click here to get The Sun newspaper delivered for FREE for the next six weeks.